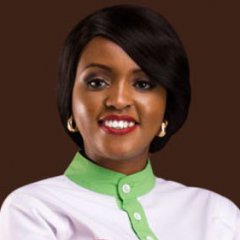 Kendi Ashitiva is the co-founder of Niskize Counseling and Call Center. She hold a Master’s degree in Counseling Psychology from Daystar University and is currently pursuing her Doctorate in Clinical psychology at United States International University-Africa.

Kendi previously worked in the pharmaceutical industry as a quality control analyst in charge of enforcing and supervising the production of intravenous fluids for a leading pharmaceutical company. Kendi resigned in 2009 on her own volition to pursue her life’s Purpose.

During this time Kendi successfully hosted a daytime TV show on one of Kenya’s leading TV stations. The show offered its millions of viewers a weekly dose of family friendly entertainment and much needed inspiration.

Kendi is also the founder of Girl Talk Kenya a platform that allows young women to have candid conversations with older women to discuss everything from sex to socks. Girl Talk holds several forums in churches and in schools with the aim of encouraging young women to pursue mentors and to live holistic lives.

After founding NISKIZE in August 2016, Kendi and her team have for the last several years offered telephone as well as face to face counseling to Kenyans from all walks of life; with the youngest caller being 5 years while the oldest being 72 years of age.

Kendi, a mother, a wife and a former TV host describes herself as a renovator of people’s lives and believes that nobody, absolutely nobody is useless or a complete waste of her time!